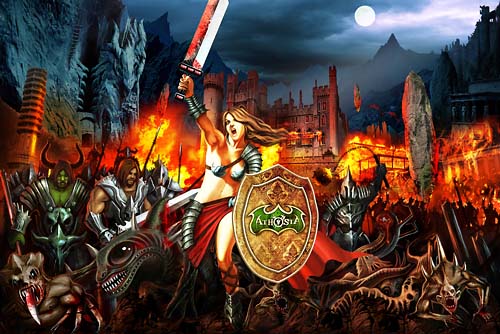 Athosia is a "Massively Multiplayer Online Role Playing Game" which enables thousands of players to fight together against the Evil or compete with each other in epic battles. Players assume the roles of Athosia heroes as they explore, adventure, and quest in a land of fanatic world. Whether adventuring together or fighting against each other in battles, players will form friendships, forge alliances, and slay enemies for power and glory. ˇľback ground storyˇż A thousand years ago a earth-shattering big bang took place, after that, as a result of crustal movement, the original integrity of the A continent split into two plates, and in the middle of the two plates appeared a huge rift. Another 500 years passed, a large number of rainwater accumulated in the vicinity of cracks, where the sea was gradually turned into. Usually the sea is calm, but every time when thunders, in the interactive influence of a variety of air steam and the crack, the central of the sea will formed a large whirlpool, then the space distorts, and connects to the mysterious world full of evil monsters. A large amount of monsters from the mysterious world landed in the continent through the whirlpool. The vast eastern part of the mainland was the first invaded place. Here lived the arrogant and self-centered forest elves, in order to survive they had been fighting against the northern trolls all along. As the invasion of the monsters, a large number of the elves have been killed and only the small unarmed elves left behind. The noble and intellectual trolls got aware of the upcoming crisis, so they suspended the struggle with the elves, and decided to clear the devil in union first. The independent and barbarous orcs who lived in the south originally learned about this news and also joined in the protest in the eastern mainland without hesitation. Smaller area of the western continent was where civilized human lived. According to the history recorded by the scholars, they learned from the big explosion happened 500 years ago and knew the consequences generated by the Big Bang, so they had made some earlier prevention and create a variety of Armor and weapons. They knew that they can make money by selling weapons and Armors, therefore they studied the languages of other races and traveled across by boat when the sea is calm to the eastern part of the continent, then sold their equipment to elves, trolls and orcs. Later on, the four major races set up their own castles, determined to unite together and fight off foreign aggressors

There are NO reviews.