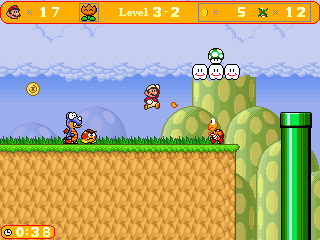 It's time again : Bowser attacks Daisy's kingdom and the princess asks Mario for help. In the seventh part of the SM PC-Games, he has to travel through 50 levels which all have their particularities. There are for example fortresses, airships, underwater-levels, episodes in a desert (where you can only move slowly), dark jungle-levels and many more different stages. However, Mario isn't alone, Toad helps him with hints and tips and Donkey Kong gives him items when he wins in one of the 8 minigames. The game convinces with its special RPG-atmosphere and graphical particularities, the gameplay (mainly the jump- and swim-system) and the graphics were improved compared to the predecessors. Together with the classical 2D-atmosphere and the legendary jump'n run-pleasure, the fangame makes fun for a long time, which is also due to the large number of levels (and each passed level can be played again at any time) and the new powerup-system (with the well-known Super Mushrooms and Fire Flowers). Altogether it's a complete package of Mario's popular platform-fun in new worlds.

There are NO reviews.